How Our National Anthem Came to Be - The Star-Spangled Banner

On a rainy September 13, 1814, British warships sent a downpour of shells and rockets onto Fort McHenry in Baltimore Harbor, relentlessly pounding the American fort for 25 hours. The bombardment, known as the Battle of Baltimore, came only weeks after the British had attacked Washington, D.C., burning the Capitol, the Treasury, and the President's house. It was another chapter in the ongoing War of 1812.

The star-shaped Fort McHenry the location of the Battle of Baltimore on Sep 13 &14, 1814

Star-Spangled Banner Back on Display

A week earlier, Francis Scott Key, a 35-year-old American lawyer, had boarded the flagship of the British fleet on the Chesapeake Bay in hopes of persuading the British to release a friend who had recently been arrested. Key's tactics were successful, but because he and his companions had gained knowledge of the impending attack on Baltimore, the British did not let them go. They allowed the Americans to return to their vessel but continued guarding them. Under their scrutiny, Key watched on September 13 as the barrage of Fort McHenry began eight miles away.

"It seemed as though mother earth had opened and was vomiting shot and shell in a sheet of fire and brimstone," Key wrote later. But when darkness arrived, Key saw only red erupting in the night sky. Given the scale of the attack, he was certain the British would win. The hours passed slowly, but in the clearing smoke of "the dawn's early light" on September 14, he saw the American flag—not the British Union Jack—flying over the fort, announcing an American victory. This 1816 print by J. Bower depicts the bombardment of Fort McHenry known as the Battle of Baltimore

Key put his thoughts on paper while still on board the ship, setting his words to the tune of a popular English song. His brother-in-law, commander of a militia at Fort McHenry, read Key's work and had it distributed under the name "Defence of Fort M'Henry." The Baltimore Patriot newspaper soon printed it, and within weeks, Key's poem, now called "The Star-Spangled Banner," appeared in print across the country, immortalizing his words—and forever naming the flag it celebrated.

Nearly two centuries later, the flag that inspired Key still survives, though fragile and worn by the years. To preserve this American icon, experts at the National Museum of American History recently completed an eight-year conservation treatment with funds from Polo Ralph Lauren, The Pew Charitable Trusts, and the U.S. Congress. And when the museum reopens in summer 2008, the Star-Spangled Banner will be its centerpiece, displayed in its state-of-the-art gallery.

"The Star-Spangled Banner is a symbol of American history that ranks with the Statue of Liberty and the Charters of Freedom," says Brent D. Glass, the museum's director. "The fact that it has been entrusted to the National Museum of American History is an honor."

Started in 1996, the Star-Spangled Banner preservation project—which includes the flag's conservation and the creation of its new display in the renovated museum—was planned with the help of historians, conservators, curators, engineers, and organic scientists. With the construction of the conservation lab completed in 1999, conservators began their work. Over the next several years, they clipped 1.7 million stitches from the flag to remove a linen backing that had been added in 1914, lifted debris from the flag using dry cosmetic sponges, and brushed it with an acetone-water mixture to remove soils embedded in fibers. Finally, they added a sheer polyester backing to help support the flag.

"Our goal was to extend [the flag's] usable lifetime," says Suzanne Thomassen-Krauss, the conservator for the project. The intent was never to make the flag look as it did when it first flew over Fort McHenry, she says. "We didn't want to change any of the history written on the artifact by stains and soil. Those marks tell the flag's story."

While the conservators worked, the public looked on. Over the years, more than 12 million people peered into the museum's glass conservation lab, watching the progress.

The Star-Spangled Banner's history starts not with Francis Scott Key, but a year earlier with Maj. George Armistead, the commander of Fort McHenry. Knowing that his fort was a likely British target, Armistead told the commander of Baltimore defenses in July 1813 that he needed a flag—a big one. "We, sir, are ready at Fort McHenry to defend Baltimore against invading by the enemy…except that we have no suitable ensign to display over the Star Fort, and it is my desire to have a flag so large that the British will have no difficulty in seeing it from a distance."

Armistead soon hired a 29-year-old widow and professional flagmaker, Mary Young Pickersgill of Baltimore, Maryland, to make a garrison flag measuring 30 by 42 feet with 15 stars and 15 stripes (each star and stripe representing a state). A large flag, but one not unusual for the time. Over the next six weeks, Mary, her daughter, three of Mary's nieces, a 13-year-old indentured servant, and possibly Mary's mother Rebecca Young worked 10-hour days sewing the flag, using 300 yards of English wool bunting. They made the stars, each measuring two feet in diameter, from cotton—a luxury item at the time. Initially, they worked from Mary's home (now a private museum, known as the Flag House), as their work progressed they needed more room and had to move to Claggett's brewery across the street. On August 19, 1813, the flag was delivered to Fort McHenry. 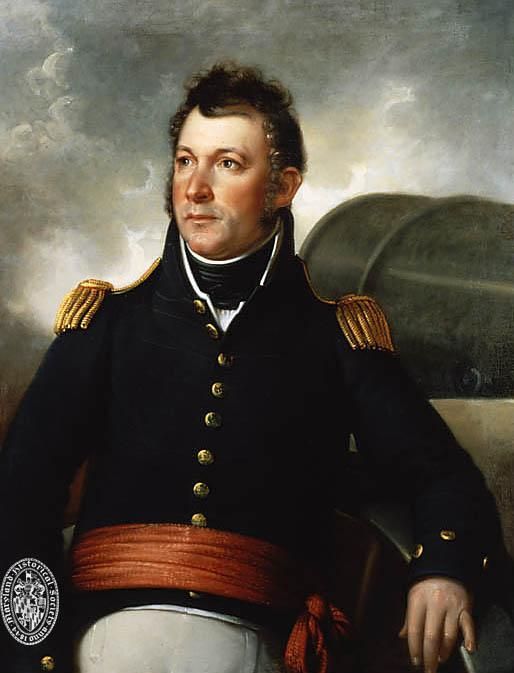 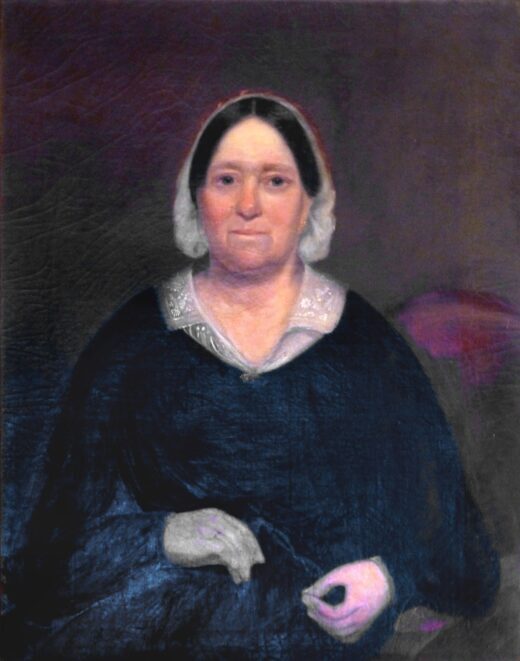 After the Battle of Baltimore

Armistead remained in command of Fort McHenry for the rest of his life. Historians are not sure how the Armistead family came into possession of the flag, but upon Armistead's death in 1818, his wife Louisa inherited it. It is she who is thought to have sewed the red upside-down "V" on the flag, beginning the stitches for the letter "A." She is also thought to have begun the tradition of giving pieces of the flag away to honor her husband's memory, as well as the memories of the soldiers who defended the fort under his command.

When Louisa died in 1861, she passed the flag down to their daughter Georgiana Armistead Appleton over the legal objections of their son. "Georgiana was the only child born at the fort, and she was named for her father," says Thomassen-Krauss. "Louisa wanted Georgiana to have it."

In 1873, Georgiana loaned the flag to George Preble, a flag historian who until that time had thought the flag was lost. That same year, Preble had the first known photograph of it taken at the Boston Navy Yard and exhibited it at the New England Historic Genealogical Society, where he stored it until 1876.

While the Star-Spangled Banner was in Preble's care, Georgiana allowed him to give away pieces of the flag as he saw fit. Georgiana, herself, had given away cuttings of the flag to other Armistead descendants, as well as family friends. She once noted, "[H]ad we given all that we have been importuned for little would be left to show." This family tradition continued through 1880 with Armistead's grandson giving away the last documented piece, says Thomassen-Krauss.

Several of these cuttings from the Star-Spangled Banner have been located over the years, including about a dozen that are owned by the American History Museum. "We're aware of at least a dozen more that exist in other museums and private collections," says Kendrick.

But a missing 15th star has never been found. "There's a legend that the star was buried with one of the soldiers from Fort McHenry; another says that it was given to Abraham Lincoln," says Kendrick. "No real evidence has surfaced to support these stories, and the true fate of the star remains one of the Smithsonian's mysteries."

100 Years at the Smithsonian After Georgiana's death, the flag passed to Eben Appleton, Armistead's grandson, who loaned it to the city of Baltimore for the 1880 sesquicentennial celebration. It then remained in a safe-deposit vault in New York City until Appleton loaned it to the Smithsonian in 1907. Five years later, he made the gift permanent, saying he wanted it to belong "to the Institution in the country where it could be conveniently seen by the public and where it would be well cared for."

When the flag arrived at the Smithsonian it was smaller (30 by 34 feet), damaged from years of use at the fort, and pieces being removed as souvenirs. Recognizing its need for repair, the Smithsonian hired Amelia Fowler, an embroidery teacher, and well-known flag preserver, in 1914 to replace the canvas backing that had been added in 1873. Having worked on historic flags for the United States Naval Academy, Fowler had patented a method of supporting fragile flags with a linen backing that required a honeycomb pattern of stitches. With the help of ten needlewomen, Fowler spent eight weeks on the flag, receiving $1,243 for the materials and work.

For the next 50 years, except for a brief move during World War II, the Star-Spangled Banner was displayed in what is now the Arts and Industries Building. Because of the flag's size and the dimensions of the glass case, it was displayed in, the public never saw the entire flag while it was housed in this location. 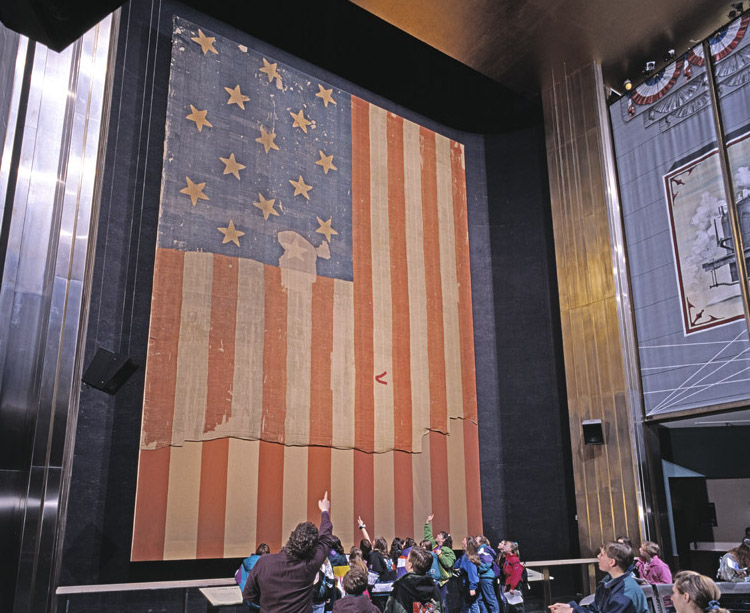 That changed after architects designed the new National Museum of History and Technology, now the National Museum of American History, with space to allow the flag to hang. The Star-Spangled Banner remained in Flag Hall from 1964 until 1999 when it was moved to the conservation lab.

With the recent completion of the project, the Star-Spangled Banner will remain an icon of American history that can still be seen by the public. Says Glass, "The survival of this flag for nearly 200 years is a visible testimony to the strength and perseverance of this nation, and we hope that it will inspire many more generations to come." 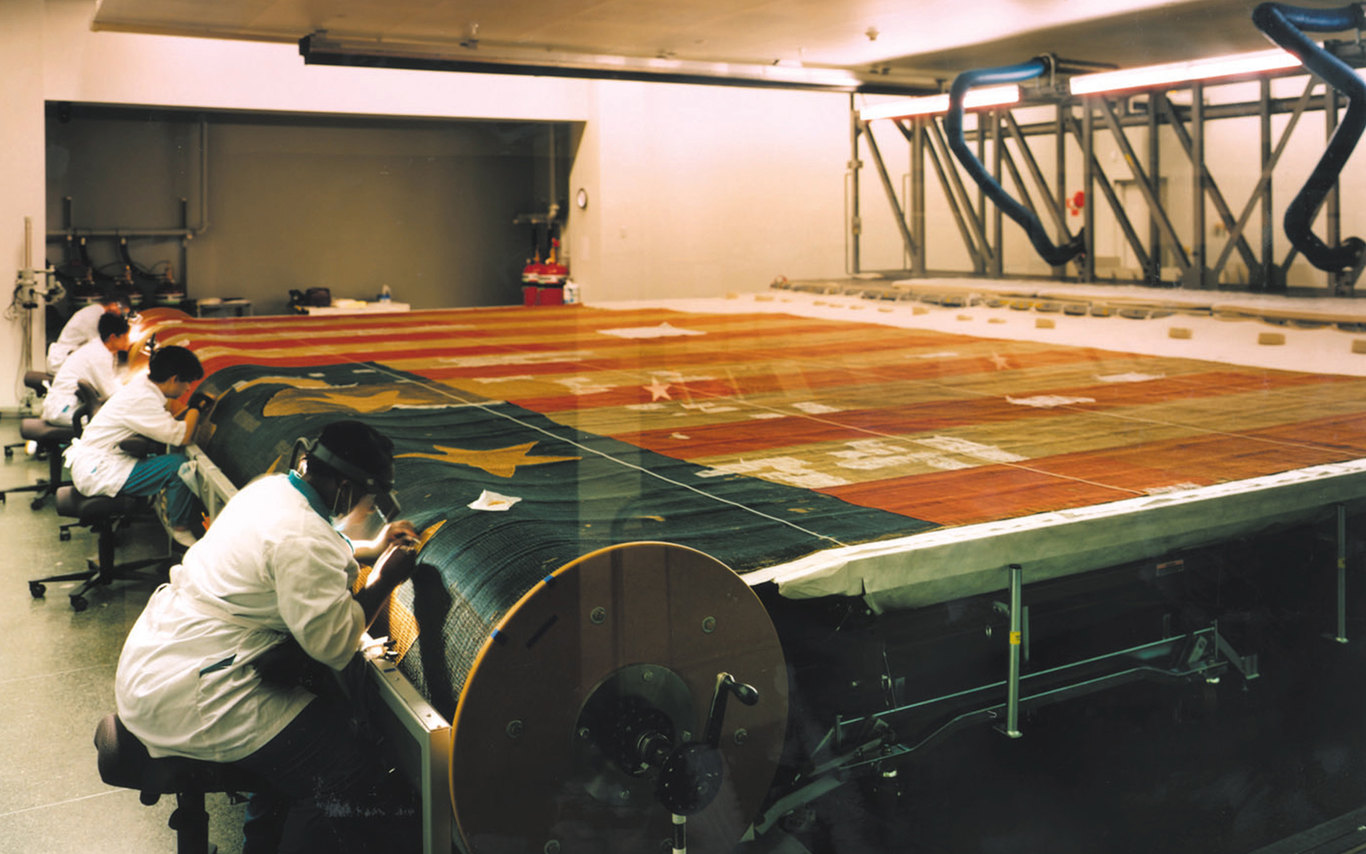 Conserving history at the Smithsonian Institute